I was 14  when I started my adventures of living on the streets. I didn’t go home for almost two years.

After a few months of couch surfing and food scrounging I met a shining prince!

His name was Sandman. 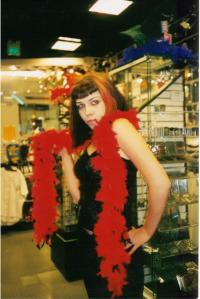 Sandman was a sweet kid, he really was. He just never had a chance. You see, his mother abandoned him when he was a child. He grew up in his father’s meth house.

Sandman had never had a girlfriend. He was smitten with me! I know this because he started doing for me something he rarely did before. Sandman started showering and brushing his teeth on a regular basis. He didn’t start wearing underwear or clean socks though.

Roughly a week after Sandman and I met, I decided it was time:

To take his virginity.

It happened late one afternoon. We parked outside a friends house in the down town, Las Vegas ghetto.

I wiggled my torn blue jeans off. Sandman unzipped and pulled out his hairy, greasy, sour manhood and slipped that baby in my dried out hole (I didn’t know how to enjoy sex until after Redbeard a few years later). He was on top of me pounding away for the most exciting five minutes of his life.

His sweat rolled through his hair and dripped onto my face.

Our socked feet bounced up and down in the window.

I know this because our friends caught us and made fun of our “puppet show” for many years.

Once I let Sandman pop his man cherry with me he was hooked.

We started parking all around town and rocking his 55′ Chevy.

One evening we parked under the fwy underpass. We huffed gasoline from a gas can and then humped like rabbits.

The police caught us just as we were zipping up. We were lucky. They let us go.

He asked me to move in.

I was sick of living on the streets. I joyfully accepted.

I called my parents. I hadn’t talked to them since they threw me out earlier in the year. They were glad to no longer be responsible for me. As a mater of fact, they dropped my stuff off at Sandman’s!

We lived in a garage that was converted into a bedroom in Las Vegas. The garage was disconnected from the house but had an attached laundry room. The garage room did not have air conditioning. It had a tiny swamp cooler. Instead of the vent being outside it was installed facing the laundry room. Whenever anyone would use the dryer our room would turn into florida in the summer, if florida was in hell!

Also, it was infested with cock roaches.

We would spend many nights spun out trying to rid the room of such nuisances. Did you know if you hold a lit flame to a cockroach they eventually explode and green slime squirts out?

One night, while coming down off a three day tweekfest, Sandman and I loaded into his fathers car.

Sandmans car was not working.

He had spent days, spun out trying to fix it. It now resembled a telephone pole, with lots of wires coming out from under the hood stretching to the inside of the passenger window! Also, a light switch from the house  was duct taped to the dashboard, it was being used as the blinker!

Though it wasn’t actually functional.

Anyway, back to the story:

Also in the car, Bobby (A 40 year old fellow powder sniffer, who was living with us and a friend of Sandman’s dad). Butterfly was joining us for this adventure as well.

Bobby was driving, Sandman sat passenger. Butterfly and I were in the back seat, chain smoking. We were coming down fast and desperate for a fix.

Bobby drove us to a trailer park. We stopped in front of a gloomy, rundown, portable home. A man was standing in front. The man was Bobby’s dealer, John.

Bobby rolled down the window.

John whispered something to Bobby.

Bobby stepped out of the car.

Then, he started talking, “We are crashing hard. What can you give me for $40?”

“Give me the money.” John said.

Bobby handed him the cash.

John slapped bobby across his face.

We all watched silently.

“Where’s the rest of it?” John asked Bobby. “Why do you think I would sell you anything when you owe me money?”

Then John reached into his back pocket and pulled out a hand gun.

He aimed it at me.

“Get out of the car!” He said while looking me in the eye.

“You too!” He aimed the gun at Butterfly.

We obeyed, obviously not wanting to be shot.

I mentioned I was FIFTEEN YEARS OLD, RIGHT!?!

“You bring me the money you can have the girls back.” John told Bobby.

Then john pointed to the trailer door and told us to go inside.

Once inside we saw a woman, higher than a hot air ballon sitting on a filthy, torn up, floral couch.

Next to her was another gun.

“You guys better wait in there for John.” She said, pointing to a small room.

There was nothing inside but a dirty, sheet-less mattress on the floor.

We sat down on that nasty thing and waited.

We were obviously terrified, trembling. We were kids!

I looked to the only window. It was nailed shut, covered in 2×4’s.

I reached into my bag. I pulled out two pocket knives. I carried them on me just incase something like this were to happen. This was not the first time I needed them, but thats another story.

I handed one of the knives to Butterfly. I opened up the other. I secured it in my palm.

“When he comes in you jump on him.” I told Butterfly.

“I will! I’m gonna’ kick him hard in his nuts! Then you stab him!” Butterfly added.

We had a plan.

A minute later John walked in.

Butterfly turned to me, with a look that was asking, “Now?”

Before I could respond, John started speaking.

“You are two very lucky girls today. You don’t know what I was going to do to you. However, that Sandman is a brave kid. He saved you. His father happens to be a very good friend of mine. If Sandman hadn’t spoke up about who his father was, I would have kept you. Bobby is a no-good, low-life snake. I wouldn’t hang around him if I was you. You girls can go. I suggest you say thank you to Sandman.”

With our miniscule weapons still in hand, Butterfly and I walked out of the torture trailer and got back into the car.

I don’t even want to think about what could have happened that night!

My adventures with Sandman were just beginning.

Where the fuck were my parents, again!?