Today, I actually rolled my pathetic ass out of bed. I was determined to do something. So, I threw on some jeans and took my daughter to Skate Depot. As it turns out, 3 year olds are not very good roller skaters. Tallulah was a hot mess. She couldn’t even keep her legs together (takes after her mommy). I think I pulled out my back holding her up. After 15 minutes we gave up and left. What a waste of $20. 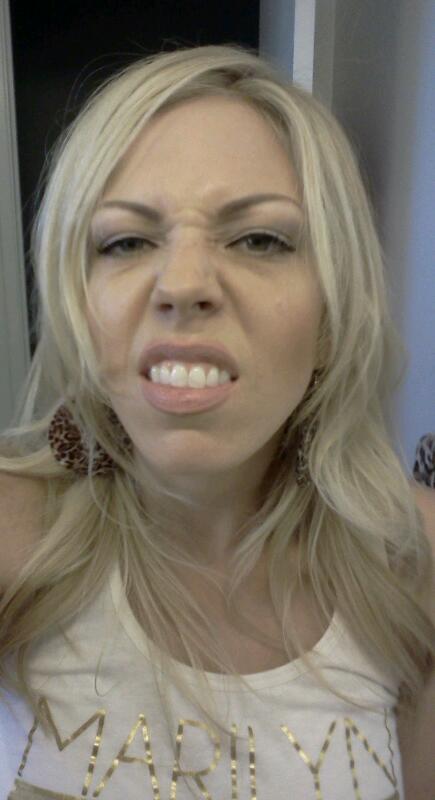 I think I may go back, alone, on an adult night. I will wear tights, hot pants and knee socks. Also, a wig. Don’t stalk me though, ok?

The stupid skating rink reminded me of Jr high. It did you too, right? Tough titty, little kitty, about your memory, this is my story.

Anyway, when I was in Jr high, my first, huge crush was on Tyler Phillips. He was the cutest boy I had ever seen, his face was overwhelmed by his giant blue eyes and a beautiful blonde, bowl cut.

I loved him so much that I carved his initials on my ankle with a cap from a soda can. That’s right, to this day I still have “TP” scarred on my leg.

I was 12 years old, hanging outside the ghetto apartment I lived in, with my friend Melony. I was wearing neon green bootie shorts and a hot pink halter top. I was very well developed by 12. We were doing the “humpty hump” while listening to my boom box when it happened.

“Hey! Who’s that chick with the big tits and hot ass?”

There, walking up to me, next to my goofy friend, Haden, was my dream teen. He looked like he walked right off the cover of Tiger Beat. I looked into his eyes, he was no doubt a cold hearted snake. 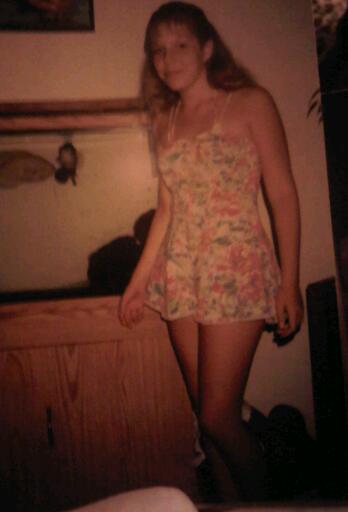 “Why are you guys listening to this crap? It sucks. Put this on.”

Tyler handed me a mixed tape. It was full of gangster rap, it had every bad word in existence on it. We played it at full volume, the “N” word was echoing down the ally.

“Only if you know how to smoke it. I’m not wasting one on some idiot who can’t inhale.”

Tyler handed me one and lit it for me. His sexy hands were right by my mouth. I wanted to lick them. Instead, I took a drag.

“You stupid, slut! You aren’t inhaling, I told you I wasn’t gonna waste one on no dummy who can’t inhale. Your lame ass is wasting my smokes.”

With that Tyler reached into his pocket and pulled out a hand full of fire crackers. He lit one up and threw it at me. I barely jumped out of the way in time. It landed on someones front porch and exploded.

I grabbed my boom box and we all ran as fast as our legs could carry us. One of my titties flopped out of my top.

The boys loved this.

We ended up at the park.

By the end of that afternoon Tyler and I were making out. I even let him feel me up.

That night I went home and wrote poetry about Tyler, I was in love.

A few days later it happened, Tyler called me, he wanted to hang out. I wanted nothing more in the world than to spend time with my illegal explosive throwing, mini man. I wrote him love letters, named my fish after him and constantly fantasized about him.

The only problem was, how? Tyler lived a city away from me and neither of our parents would let the us have a friend of the opposite sex over to hang out. Tyler had a magnificent plan. He was a grade higher, two years older and a lifetime more experienced than I was.

Tyler had even been to juvey.

“What you need to do is call your school, pretend to be your mom and tell them you are sick. Then, write a note to take into the office Tuesday and forge your mom’s signature onto it. I do it all the time, it’s easy. Hop on the city bus and take it down town, exit on Berry Street. I’ll be there at the bus stop to get you at 7:05.”

“But what if I get caught?”

“You won’t get caught, are you some kind of pussy or something?”

Truth was I didn’t even care if I got caught. I loved Tyler, I would have robbed a bank with him, had he of asked me. The thought of doing anything prohibited with him, turned me on.

That was the longest weekend, EVER! I couldn’t wait for Monday morning to come. Even my mom wanted to know why I was being so nice.

Finally, Monday came. Quietly, I picked up my mothers cordless phone and dialed the school. In the most adult voice I could muster, I lied to the school receptionist.

She totally bought it!

I remember leaving my house that day and walking past my school bus stop. I paused and explained to my friends what I was up to. Then, I told them if anyone were to ask where I was, to tell them I was home, sick for the day.

Hurriedly, I continued on to the city bus stop. After a few minutes it arrived.

I stepped inside and placed a dollar in the machine. Just as I was about to plop into the first vacant seat, I heard it.

It was my grandma, oh, shit. She worked a few blocks from where Tyler lived, I had totally forgotten.

“Hi, Baby. What are you doing on this bus? Does your dad know where you are? Shouldn’t you be in school today?”

“There is no school today, Grandma,” I lied, “It’s teacher appreciation day. Yes, my dad knows. I’m going to see my friend, Tangerae.”

Then, I couldn’t believe it. My grandma reached into her purse and handed me money.

Here I was ditching school, lying about it to my grandma and I was being rewarded for it.

I knew I was going to be in so much trouble for this when I got home, but I didn’t care. I was so excited. Actually, this was the single most exciting day of my life. I couldn’t wait to get there.

Grandma exited a few stops before me, thank goodness. Then I saw the sign, Berry Street. I pulled the chain. Slowly, the old bus squeeked to a stop. The door opened. Just as I had begun descending the stairway, I saw him, my ghetto prince. He was wearing a Red Starters jacket and sagging his jeans. His sexy boxers were hanging out.

I jumped off the last step and followed him back to his trailer. He led me straight to his room. Once inside, he turned on Full House and then stuck his tongue in my mouth.

After about an hour of this, I decided to finally allow him to remove my top. We made out some more. Eventually, he had me down to my thong panties. I wouldn’t let him go any further. By lunch time he had given up.

“You are a tease. I might as well go to school since this isn’t going anywhere.”

What did this mean? I thought we were having a great time.

Tyler got dressed, I followed.

“You remember how to get to the bus stop?” he asked me.

“Make a left at the end of my street. Walk straight one block. It will be on the right hand side. You can’t miss it.”

While walking back, alone, to the bus stop I realized it. I had Tyler’s gum in my mouth! I chewed it all the way home. Then, I put in a plastic baggy and saved it.

I never got caught.

Six weeks later I was hanging out with Haden at his apartment. There was a knock on the door, I answered it. It was Tyler.

“Get out of my way, Bitch,” he ordered while pushing me out of the door way.

“Fuck you,” I said with my arms crossed. I sat down on the couch.

I was in shock, I was REALLY excited to see Tyler. For weeks I had been thinking about him. Now, he was being an asshole to me for no reason.

Tyler sat down on the chair across from me. He and Haden said their hellos, then, they starting having guy talk. I decided to ignore them and zoned out on the TV.

That’s when it happened.

“OWWWWWE!” I yelled out while grabbing the side of my face.

Something had hit me, hard. I looked down to the floor. There it was, a Ninja Turtle.

Tyler started laughing, he thought this was hilarious. I picked up the ‘hero in a half shell’ and chucked it back at him, I missed. It hit the wall.

Tyler loved this. He picked Donatello back up and chucked him at me again. Again, he got me, right in the face. This time, my eye. It was starting to swell.

I was pissed. I picked the fucking toy back up. Then, I waited.

“What? Are you gonna cry about it? Poor little baby have a booboo?” Tyler taunted.

Tyler and Haden went back to their previous conversation. Once I was sure that Tyler had forgotten about the turtle, I made my play.

I took that mother fucker out from under my ass and I chucked it, with all my might, right at Tyler’s beautiful face.

It hit him, dead on.

“What the fuck? You stupid Bitch! I’m gonna fuck you up!” He yelled.

“Oh, ya? Let’s go, then!” Even at the age of 12, I was delusional about my size. I thought I could probably take him.

“If you two are going to fight, take it outside,” Haden ordered.

So, we did. Right into the ally.

Once we were on the concrete, Tyler came at me with a closed fist, he swung. The first punch hit me in the mouth. My lip burst open. He swung again, this time he hit my nose. A river of blood immediately descended upon my new, white shirt. I fell to the ground. Tyler began kicking me.

“My shirt!” I whaled, “This blood is going to stain my new shirt!”

Haden took me back into his parents apartment. I went to the bathroom sink and began running my shirt under cold water. The blood wasn’t coming out. I looked in the mirror, both of my eyes were turning black and my lip was huge and swollen.

Tyler walked in, “I’m sorry about that,” he said, “you really pissed me off. I hope you learned a lesson, though.”

He grabbed my shirt and started adjusting the faucet, “Use hot water, that’s supposed to help get the blood out.”

My parents asked me that night, what had happened to my face. I told them that I had tripped. Though, they didn’t believe me, they never pressed further.

I think the hot water set that stain in, because it never did come out.

I dated Tyler on and off until I was 24, but that’s another story.