It was 10:00 am on a Sunday morning in June. I parallel parked my car (just barely) and walked inside the tiny Indian restaurant. Red was sitting alone in a corner table waiting for me and she had already started on the endless Champagne.

“I’m so hung over, I went out with some creep I met on Myspace last night. He was so annoying I downed Martini’s as fast as I could. I woke up this morning and he was in my bed, naked. Ugh, oops, I had to sneak him out of the house. He ended up climbing down the balcony. Grandpa just told me the other day that I was a slut and I couldn’t have any more ‘strange visitors’.”

“AHAHAHAHAHAHAHAA!” Red was hysterically laughing. Once again I had amused her, “You seriously made him climb down the balcony?”

“Yes! Also, I made him take the used condom. I wasn’t going to get yelled at again. He has texted me six times already. Like I’m ever going to go out with him again. Idiot.”

I gave Red “the death stare”. She continued laughing but she knew to shut her trap.

Once my champagne was filled to the brim I waddled my fat ass over to the buffet line. After I finished, literally, all I could eat and Red and I consumed enough Champagne to kill a small horse we were off to meet our friends. For: A fun-filled day at the beach.

First stop: the grocery store. There, red and I grabbed an enormous bottle of cheap vodka and several gallons of juice. In the parking lot we dumped out each bottle of the juice until it was half empty before refilling each with vodka.

The “no alcohol allowed on state beaches” law did not apply to us. We were brilliant. Also, probably alcoholics.

One we had arrived to the sea-shore, we set up a spot at a fire pit. Some of our friends showed up not long after. We made sure everyone had 40 ounce cups filled with our intelligently concocted cocktails. We are amazing hostesses even in the sand.

After a few glasses of “beach booze”, Red grabbed a boogie board and asked me to join her for a dip.

“It’s too cold, Red. I’m not going into the water until I have to pee,” I complained.

Red shrugged. Then, I watched her shiver as she took the board into the sea. I laughed out loud when a wave slammed into her and she ate shit.

That’s about the time it happened.

I needed a plan.

There was no time. Holding my ass cheeks together I did what any drunken piece of white trash would do in my situation; I ran like hell into the ocean and moved my bikini bottoms over to the side. I unleashed probably a gallon of curry scented liquid dung.

Red was not far from me. I know because I watched her come out of the water next to me. Once her head had bobbed above the surface, she spit out a mouth full of the sea. Now, she was eating shit of another kind.

“You decided to join me?” She asked with a big, ignorant grin on her face.

“Oh, God, Red! That Indian food just kicked my ass. I thought I was going to die.”

“I just had explosive diarrhea.”

“What?” Red did not quite understand.

“In the water,” I explained with a disturbed chuckle.

“What the fuck is wrong with you? Are you serious? I just had a mouth full of water! Oh my God! You are going to make people sick, *****!”

“Chill out, Red. Sewers drain into the ocean all the time.”

Red was pissed. She stormed back to shore and started a conversation with one of our friends about my nautical feces. Red was tattling on me.

I finished releasing my rotting bowels and joined them. It was time for lunch. Red removed the sausages from the fire pit. After cooling, I opened up a piece of foil and took a bite. Ok, I tried to take a bite but they were hard, like little pieces of petrified wood. 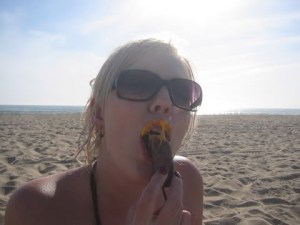 “What the hell happened to the sausages?” I asked Red.

“I forgot about them, why are they THAT bad?” she asked me.

“Worse!” I yelled as I tossed mine in the air like a Frisbee.

Just then, a swarm of seagulls flew towards their prize. One unlucky bird caught it in mid-air, then dropped it. The ocean rats all landed and swarmed to get their chance at a rock hard meal. It was passed from bird to bird being denied by each. I had never seen anything like it.

“Wow, Red. I don’t know what to say. I have never seen pigeons turn down food before. You must be the worst cook in the world.”

“Ya, no kidding,” she agreed in shock.

More people were joining our fun day in sun. In the distance we could see Iggie walking towards us with her baby sister, Brittney. Once they made it to our designated, asshole area, Iggie introduced us.

“Brittney has a joke for you guys,” Iggy explained.

“I love jokes!” I drunkenly slurred.

Yup, I did it again. I said the number one most inappropriate word a white person could say. Only, I directed it to a nine year old.

“What?” The little girl asked, looking to her big sister for support.

“OH MY GOD *****! WHAT THE HELL IS WRONG WITH YOU? WHY WOULD YOU SAY THAT? HE HAD A DREAM! MARTIN LUTHER KING HAD A DREAM!” Iggy screamed.

I didn’t understand why she was so angry, I thought I was hilarious.

Then, the most amazing thing happened. Brittney shook her head, smirked at me and said, “You have issues.” I was just told off conservatively, by a 9-year-old with a higher maturity level.

Just as I should have been turning hot pink from some well deserved embarrassment my attention was diverted. Five of our friends had started a game of Red Rover on the beach.

I saw that one of the teams was out numbered. Being the ever considerate person I am, I figured I better help out the smaller team. That’s right, by breaking through the hands of the larger team out of turn.

Uh huh, With the force of a beaten buffalo I took off in the sand. My fat rolls were bouncing up and down. Just then, as I was running towards my unsuspecting victims, I was filled with the spirit of the ocean. At least I think it was a spiritual awakening because before I even knew what I was doing I had flung my top off and was sailing half-naked and full forced into the bodies of my unsuspecting male friends.

As it turned out, they loved this and even wanted more. Everyone got a little feel of my enormous, drunken milk jugs that day.

Iggie never brought Brittney back to any of our functions ever again.

To Grim, timing is everything.

If you enjoyed what you just read, become active in the authors warped community: